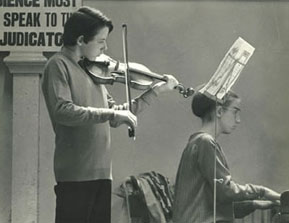 Feis Ceoil owes its existence to the fact that, 125 years ago, a Mr. T. O'Neill wrote to the Evening Telegraph complaining of the neglect of Irish music and musicians. As result, a committee was set up by Dr. Annie Patterson to run one music festival in 1897. This first Feis Ceoil was such a resounding success that the Feis Ceoil Association was formed with the intention of running this competitive music festival annually, rotating between Dublin, Belfast and Cork. It went to Belfast twice, but thereafter made Dublin its permanent base.

The profile of Feis Ceoil has changed dramatically over the course of its existence. The first Feis Ceoil had 32 competitions, 12 of which were for composition, 6 for vocal ensemble and the rest for solo performance. Feis Ceoil has over 185 competitions, including composition, conducting and the rest for performances which include Choirs, Orchestras, Ensembles and Soloists. The festival goes from strength to strength and last year, we had performances from almost 5,000 young musicians, right across all categories of instruments, including voice.

In all its years, Feis Ceoil has only cancelled the festival twice. The first was during the Foot and Mouth crisis of 2001 when people were being advised not to travel, and again in 2020 due to the COVID-19 pandemic. In 1916, the Feis had to be postponed until July due to the Easter Rising. Thanks to the generosity of the Commissioners for National Education, the event took place in their schools in the week commencing 17th July 1916. In 2021, despite Ireland being in lockdown, Feis Ceoil went ahead with all competitions held virtually.

Through the decades almost every Irish musician has performed in Feis Ceoil, which provides them with their first platform. John McCormack's wonderful career began when he won the Gold Medal for the Tenor Competition in 1903. When, for the first time during the Second World War, English adjudicators could not travel, he adjudicated at Feis Ceoil and said "... the war gave me the opportunity to pay a debt of gratitude to Feis Ceoil of more than 40 years. I was the lucky winner of the Tenor Solo Medal in 1903 and now, in 1944, I adjudicate for the first time".

There is a legend of long standing that John McCormack beat James Joyce in the Tenor Competition. There is no documentary evidence of this; however, James Joyce did win the Bronze Medal (3rd prize) in the Tenor Competition in 1904. It is said that he did not agree with the stipulation that competitors had to do some sight-reading, and left the stage.

There was a slight hitch in the 1913 Feis Ceoil, when some competitors withdrew from Choir competitions due to the fact that the song set for one of the competitions - Fair Clarissa - had the word "kiss" in it more than once. This was widely reported in the Press, but the Feis Ceoil Committee held firm, and Clarissa kept her place! Names of performers through the decades; Margaret Burke Sheridan, John McCormack, Suzanne Murphy, Bernadette Greevy, Eithne Robinson, Hugh Tinney, Philip Martin, John O'Conor, John Ronayne, Emma Murphy, Geraldine O'Grady, Anne Murray, Mary Hegarty, Cara O'Sullivan, Orla Boylan, Finghin Collins, Cora Venus Lunny.

Since the first festival in 1897, the Feis Ceoil has grown, thanks to the ever-increasing number of talented young musicians who perform at the event. Today Feis Ceoil continues to provide that all-important first platform for those of our young musicians who wish to become performers and for all those who simply wish to show their love for the music which they have been studying.